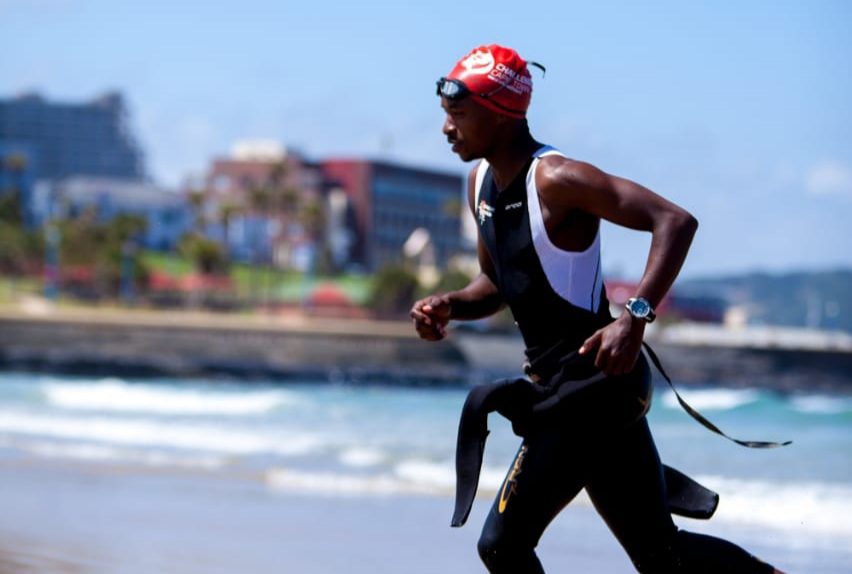 After observing that black people are the ones drowning in the beach during festive seasons, lifeguard and triathlete Sikelela Kakele decided to start swimming lessons for young and old people to help reduce the numbers of people that drown in the beach and swimming pools at Joan Harrison Swimming Pools in East London.

In 2014 he did a Lifesaving course at Monwabisi Beach in Cape Town, that’s when he realized that he loved swimming.

The initial idea behind teaching people how to swim was to raise funds for his trip to the ITU Triathlon World Championships in Switzerland, however, that did not materialize as the target budget was not reached. While working as a lifeguard he was troubled by the number of black people that drowned.

The ambassador for On South Africa which is a running shoe company that originates from Switzerland was selected to be part of a Social Year Programme done by the Department of Sport, Recreation, Arts and Culture (DSRAC) that allowed him to go to Germany where he worked in a school and taught children how to swim.

He also did more swimming courses in Germany and is a Technical Official which is a referee in a triathlon.

Kakele said he was selected to participate at the Triathlon World Championships in Slovakia for 2020, which was cancelled because of Covid-19 and is to happen in August 2021, he cannot go because of financial reasons.

Finances have always been a challenge for him as he was supposed to go to Switzerland for ITU Triathlon World Championship in 2019 but couldn’t because he could not raise funds as he had to fund the trip from his pocket.

Now he struggles to find people to teach as they cannot afford his lessons. However, winter is also a challenge because people are not coming. After all, it’s cold.

“I knocked on different doors to get funding, for my first trip to Switzerland, for the trip to Slovakia and I am still looking for funds for my company, Learn to swim, to assist me to get more children to teach as some cannot afford the lessons even though they are interested,” said Kakele.

The people he teaches swimming are promising, dedicated and most of them want to do Iron Man next year and one of them who is in Port Elizabeth (Gqeberha) had her first race recently.

He has under 15-year-olds that want to participate in the Gala Swimming Competition which means there is progress.